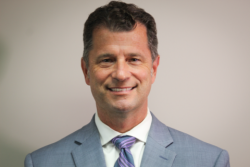 Born and reared in Bloomington, Eberle joined Bloomington Rotary in 2002.  He
has served on the club's Board of Directors and, most recently, the membership
committee. He was Club President in 2013-2014 and Treasurer for six years.
At the District level, Eberle has served as assistant governor from 2014-2017, and
also served as membership co-chair. He is a graduate of the Rotary
Leadership Institute.

Outside of Rotary, Eberle has also been active in youth programs, serving on the
Board of Directors for the Boys & Girls Club of Bloomington for more than 20
years, including a term as Board President, and also served at the state level.

Eberle received his B.S. in Industrial Management from Purdue University and his
MBA from Butler University. He has been a partner with First Insurance Group
for over 16 years. Eberle is a Certified Risk Manager and Certified Insurance
Counselor who works with small and medium size businesses to assist them
identify and minimize their risk exposures.

He lives in the Bloomington with his wife, Stephanie, and two sons. He enjoys
water sports, including skiing and sculling. 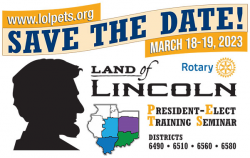 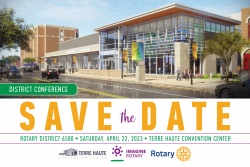 * The Columbus, IN native will use the $40,000 award to pursue a master’s degree in Education, International Development and Social Justice from St. Mary’s University in London.
2021-22 Global Grant Scholar Cameron Davidson
Rotary Leadership Institute
The leadership skills obtained at an RLI event will not only help Rotarians in their Rotary career, but will apply to their leadership efforts professionally, as well. Learn more about our next event under the 'District Links' tab above.